Unfortunately the jewellery symposium cannot take place as planned due to the current Covid-19 situation. We will probably make up for the event in autumn; we will keep you informed about the planning.

In this lecture event, the STI will again provide information about the latest technological developments in the field of jewellery production and invite the participants to exchange experiences. There will also be a summary report on the most important lectures at the Santa Fe Symposium in the USA.

STI at Pforzheim University wins the contract for a major European project, SUSMAGPRO

Rare earth-based permanent magnets are the key to a clean energy future in Europe. Whether in wind turbines, electric vehicles or a variety of household appliances, permanent magnets are obligatory (and in many cases irreplaceable) components. At the same time, however, Europe has failed to secure appropriate sources of raw materials.

The European magnet industry requires about 2,000-3,000 tonnes of rare earths per year, which today have to be imported at 100%, almost exclusively from China. At the same time, the current recycling rate for the rare earths contained in these magnets is pathetically low at less than 1%. In all respects, therefore, the recovery, recycling and reuse of permanent magnets is the only viable way to ensure a sustainable future for key industries such as automotive, aerospace, electric vehicles, e-bikes, wind turbines and a wide range of consumer goods (almost everything that uses electricity also uses magnets).

Instead of disposing of these strategically important materials at the end of their useful life in landfills or exporting them to other parts of the world, the SUSMAGPRO (Sustainable Magnets Production) project provides the technology to effectively and competitively recycle the many tonnes of magnets already imported into Europe in millions of devices.

To this end, SUSMAGPRO is developing four pilot plants that cover the entire value chain of processing, from robot-assisted sorting, separation and magnet/alloy production to new permanent magnets made of recycled material. By the year 2050, a recycling rate of about 30% is aimed for, as is also usual for other technology metals such as silver, platinum or palladium. This will significantly strengthen the position of European companies in the global markets for renewable energy systems (RES) and enable CO2-free mobility and energy.

The SUSMAGPRO Consortium consists of 20 European partners from 9 countries and is led by the Institute for Strategic Technology and Precious Metals / Jewellery Technology Institute (STI) at the University of Applied Sciences Pforzheim. The project runs for four years and has a total volume of 14.9 million Euros. It is funded with 12.9 million euros by the European Commission's Horizon2020 research framework programme. The STI at Pforzheim University receives a grant of 2.1 million euros.

The Ispringen-based company OBE Ohnmacht & Baumgärtner GmbH is another project partner from the region and will realise one of the four pilot plants, the construction of which is being funded with almost 700,000 euros. The other pilot plants will be built in Sweden, Great Britain and Slovenia.

The project consortium of SUSMAGPRO prevailed in the tender of the HORIZON2020 programme "Raw material innovation for the circular economy: sustainable processing, reuse, recycling and recovery systems" against 52 other projects, of which only one other project received funding. SUSMAGPRO achieved the extremely rare maximum score of 15 points in the evaluation of the European Commission. 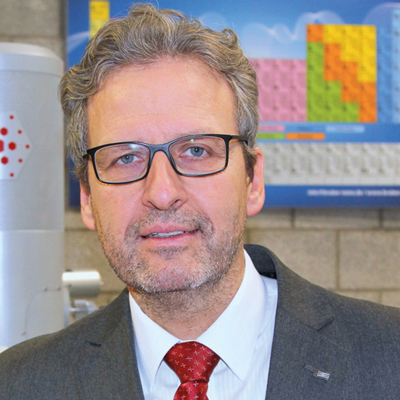 On 01.04.2017 Prof. Dr. Wolfgang Böhm handed over the management of the institute to Prof. Dr. Carlo Burkhardt after 21 years of successful work.

With a doctorate in materials science (University of Birmingham, GB), he can look back on more than 20 years of industrial experience in his new position as head of development at Witzenmann GmbH (Pforzheim) and as technical director of OBE Ohnmacht & Baumgärtner GmbH & Co. KG (Ispringen) and an equally long teaching career at Pforzheim University.

His previous activities have focused on the analysis and design of stainless steels, powder metallurgical and high-performance materials for the automotive, aerospace, industrial, medical technology and luxury goods industries, as well as the management and implementation of demanding customer and research projects at component and part level.

In the accredited DAKKS test laboratory of the STI, he and his proven team will be available to you as a competent contact person for material, coating and damage analyses, the preparation of test reports and expert opinions, the development of improvement measures and process optimisation as well as for the development of new products and manufacturing processes.

Together with the management of the institute, Mr. Burkhardt will assume a professorship for production engineering. He has been a lecturer and honorary professor at the university since 1996.

The electronic ring gauge of the STI, which is often used in the wedding ring sector, has proven itself in practice and has been further improved. 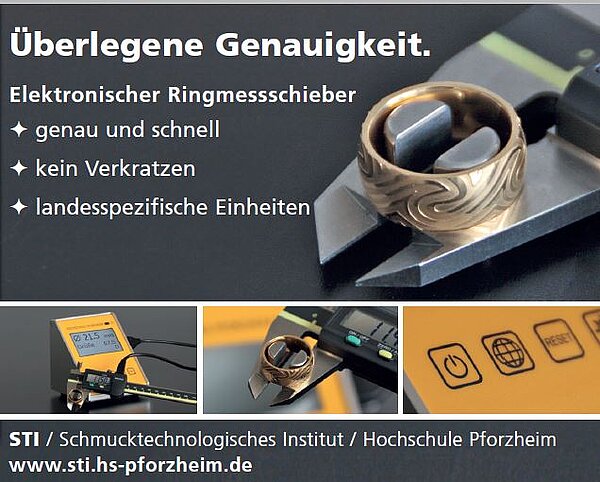